iCarly Wiki
Register
Don't have an account?
Sign In
Advertisement
in: Characters, One appearance only, Season 1,
and 6 more

Freddie Benson (for a short while)

Carly Shay (Because her show is more popular)

Role in the show:

Valerie was Freddie's girlfriend, until he found out she used him just to have a perfect webshow. Her first scene was video chatting with the gang. Valerie mentioned that she liked Freddie, and she even agreed to go on a date with him. Then things got harder.

They first had their date, and then Valerie asked Freddie to make her website and help her on her webshow. Freddie then told Carly and Sam that he was moving on to a new webshow. Instead of Freddie doing the tech stuff for iCarly, Carly and Sam had to work with Jeremy. Then Valerie tried to steal Sam from iCarly, also. Sam just played along, then right away told Carly, though Valerie had told her not to. Freddie then realized he was being used by Valerie, and broke up with her. So Valerie is said enemy.

In the ending, Valerie, now without any allies, is forced to continue with her show without anything to show or a technician to help out. On her next video she tried to show a video of her family's recent trip to Idaho (although this appears to be her only option), but she didn't know how to make it appear on the screen. While she was trying to get it to work, it fell on her head and knocked her down. She was luckily not seriously harmed, but she was forced to admit in embarrassment she had nothing to show.

It is most likely she had to give up on her webshow afterwards due to her lack of resources and allies.

She can also be spotted as a character in iCarly 2: iJoin The Click.

She is played by Carly Bondar. 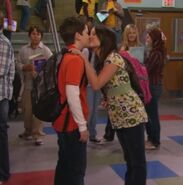