Like another user(and maybe others), I'm way past the target demographic of iCarly as well as most shows on Nickelodeon. I'm familiar with Miranda Cosgrove from Drake & Josh, of course, but I'm also familiar with Jennette McCurdy from her riveting performance in the Law & Order: Special Victims Unit episode "Contagious."

Who are these people?

My ultimate goal is to find out every obscure guest star who appeared on the show. Many actors were given credit without characters in various episodes. The Internet Movie Database isn't always right about this(and I know, because I also contribute to IMDb on a frequent basis.). I've even tried writing to Dan Schneider himself about this, but he refuses to answer me. The incomplete list of characters I've wondered about include the following;

Carly suspects she may look a little too saucy for the Wade Collins music video "Cry Like a Lion." I would like to have seen Sam in one of those dresses. 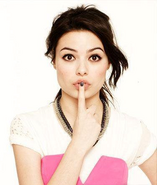 Correct me if I'm wrong, but isn't this pose more akin to publicity for Hannah Montana rather than iCarly? 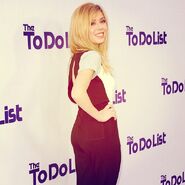 Jennette at a premiere for the 2013 summer sex farce "The To-Do List." Her very appearance at such a movie adds more fuel to the perverted fantasies about her in millions of men.

Proof that Bushwell Plaza is the Eastern Columbia Building, for those who don't believe it.

After all these years, I found out the Clown with Bra in "iHeart Art" was played by Jimmy Graham
Add a photo to this gallery

Retrieved from "https://icarly.fandom.com/wiki/User:DanTD?oldid=940587"
Community content is available under CC-BY-SA unless otherwise noted.