iCarly Wiki
Register
Don't have an account?
Sign In
Advertisement
in: Characters, One appearance only, Season 4,
and 4 more

View source
watch 02:24
Wiki Targeted (Entertainment)
Do you like this video?
Play Sound

Steven Carson was Carly's (now ex-) boyfriend in the iCarly/Victorious Crossover, iParty With Victorious. Steven's parents are divorced - his mom lives in Seattle and his dad lives in Los Angeles - but his parents have joint custody, so Steven switches off every month between LA and Seattle. Due to switching off every month with his parents, Steven is homeschooled, but he is very smart and well-adjusted to teen social settings.

Carly appears to love him very much, but after three months of dating him, she finds out that he's also dating Tori Vega in Hollywood. When she tells Tori about it, they team up to expose him as a cheater live on iCarly, and they both break up with him.

When Carly informs the viewers of iCarly that Steven is her ex-boyfriend (putting emphasis on the "ex") Steven replies, "Ex...?" as if he was expecting it a little, but when Tori informs him that she is also breaking up with him, he suddenly cries out, "Ex?!" like he doesn't believe it. This may be because Steven was more into Tori than he was into Carly, or he just didn't expect to lose two girlfriends in one night (possibly both).

To tie-in with iParty with Victorious, iCarly.com and TheSlap.com posted two separate blogs describing Steven, with various hints that connected iCarly and Victorious. In both Carly's and Tori's blog his name is spelled with a "v", however in sneak peek number 2, as Carly is looking at his picture with Tori on theslap.com, his name is spelled with a "ph." In the actual episode at this scene, however, his name was fixed to a "v."

According to Carly's blog:

According to Tori's blog: 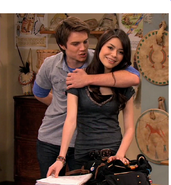 Carly and Tori breaking up with Steven live on iCarly