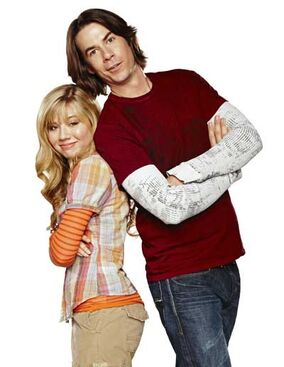 Spam is the romantic/friendship pairing of Spencer Shay and Sam Puckett (Sp/encer and S/am). Its rival ships include Seddie, Cam, Sibby, and, on a smaller scale, Fencer. The two of them seem to be very close friends, and Sam likes Spencer very much, but Spencer sometimes gets annoyed when Sam eats all their food (mostly his food) or deletes his favorite shows just because she feels like it. Sam, like Spencer, has artistic talent (as demonstrated by her elaborate doodles in iHate Sam's Boyfriend, iDate A Bad Boy, and iMust Have Locker 239), and they discuss this from time to time. They have known each other for a long time now. Sam also helps Spencer with his art projects at various times. They can both be a bit eccentric. They might be a little closer than brother and sister, or even friends, considering they often hang out and do some things together, even when neither Carly or Freddie are around. They sometimes seem to have more patience for each other than they do for most other characters - especially Sam for Spencer.

This pairing is generally considered very unlikely to go any further than a friendship on the show, mainly because there is a major age difference between the 2 of them (12 years), and iCarly is on a kids/teens network. Despite this fact, many people still ship Spam romantically.

In iGet Pranky, Sam finally admits that she has a slight crush on Spencer. Spencer mentions it once again in iToe Fat Cakes, even though it has been awhile since Sam has mentioned her crush.

In the finale of the show, iGoodbye, Spencer unexpectedly gives Sam a motorcycle they have spent the entire episode fixing. When she asks him, "Why would you give it to me?" he says, "Because you're a great best friend to my little sister. And you have a good heart. And you deserve it."

Episodes with a Spam Subplot

iLost My Head in Vegas

Sam: [angrily] "Dude, if I didn't have a little crush on you, you'd be falling for my baseball bat to your face bit!"

Spencer: I know you have a crush on me...

Spencer: [looking away and speaking quickly] Nothing!

Sam: Socko just gave you the coolest motorcycle on the planet?! For free?

Spencer: Nah. I think I'm gonna give it away.

Sam: Are you insane? Give it away to who?

Spencer: Because you're a great best friend to my little sister. And you've got a good heart. And you deserve it.

View the Spam gallery (for Spam screen caps and such) here.

Side Effects by PigSlay- In "iFight Shelby Marx" the doctor listed all the major side effects from the allergy medicine... except one. Rated T.

A Stolen Moment by doornumberthree- Sam seizes a rare and very unusual opportunity for her second kiss, Spencer enjoys it a lot! ... and all because of some experimental allergy medication! Rated T.

Finally by Abster1- There's more heat in that twelve feet of separation than Sam's ever felt before. Post iKiss. Rated T.

Best by Abster1- Sam deserves the best. But that's not Spencer. Even if it's what she wants. Rated T.

Artistic Endeavors by EverSmilingMaze - Spam friendship. Or not, depending on how much you read into it in that case, there are a LOT of "oh..so close" . Sam and Spencer decide to collaborate. Rated T.

Spam FanPop -The Fanpop Club for Sam and Spencer together.

Spam Love-Tumblr for the relationship of Sam and Spencer.