Spaghetti Tacos are a creation by Spencer Shay, which he invented one night, when he couldn't decide whether to make spaghetti or tacos. The dish is a favorite of Carly and her friends.

In iWill Date Freddie, Spencer serves them to Freddie and his date. In iPie, Spencer made them for Trudy when she came over to his house for dinner. In iCook, Carly, Sam, and Freddie were challenged to a spaghetti taco Food Fight with Ricky Flame (in which they were to cook the same dish, and the judges would decide which version was better), which they won. They are made of spaghetti, meatballs, and taco shells. They also contain Peruvian Puff Peppers, which is a reference to Drake & Josh, one of Dan Schneider's previous shows. The iCarly gang won the competition, AND a year supply of free steaks.

In the episode iFind Spencer Friends, Spencer and the iCarly gang celebrate Spencer's birthday with a large spaghetti taco with candles on top.

Schneider initially created spaghetti tacos as a joke for the iWill Date Freddie episode broadcast on November 10, 2007. However, over the years, the formerly fictional delicacy became a popular dish in real life, imitated and experimented on in various ways by thousands of tweens and parents nationwide, although they usually do not contain meatballs - the one part of the recipe that didn't catch on.[1] The dish was even enjoyed by the cast members: Nathan Kress recalls making and consuming some on a day when craft services served spaghetti and had some taco shells lying around.[2]

Dan Schneider was shocked to see his creation become a fast-growing reality and then mentioned on the cover of the 'Food & Wine' section in the New York Times, (Oct. 6, 2010).[3]

Directions: Break pasta in half and prepare per package instructions.
Bring a large skillet sprayed with nonstick spray to medium-high heat on the stove. Add soy crumbles, crushed tomatoes, and taco seasoning, and mix well. Cook and stir until hot, 2 - 4 minutes.
Drain pasta and add to the skillet. Mix well. Evenly distribute pasta mixture among the taco shells, about 1/3 cup per shell. Evenly top each taco with cheese, onion, and lettuce. Tada! [4]

Spaghetti Taco as a dessert 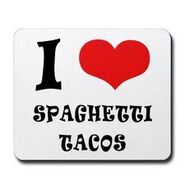