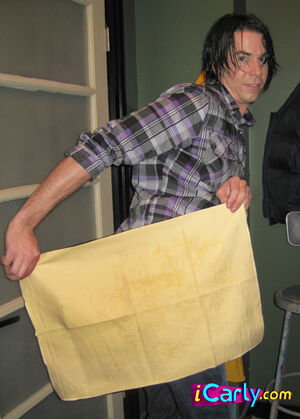 A Sham-Pow! is a home cleaning and personal use multi-tool, similar to a thick, yellow cloth towel. It is soft like a blanket, sturdy like a bath rug, and extremely absorbent. Spencer Shay purchased several for his personal use and is very fond of exclaiming Sham-Pow! when using or describing the object. This appeared in iDate a Bad Boy. The Sham-Pow! can absorb up to three times its weight according to Spencer.

Sham-Pow! is a rather obvious parody of the Shammy, or Sham-Wow! According to his blog, Dan Schneider decided to put Sham-Pow in an episode after several of the iCarly writers ordered Sham-Wow's and became obsessed with them.

Apparently, Sham-Pow is a commercial that comes on at three in the morning and originated from Germany.


Sam: Yeah.
Spencer: (wipes hair with Sham-Pow) Feel my hair now. (Sam feels it) Dry right?
Sam: Is Carly here?
Spencer: Wanna see what happens when I stick my Sham-Pow in the toilet?

Like a shammy/like a towel, the Sham-Pow! is a sponge and a washcloth mixed together times five.

Retrieved from "https://icarly.fandom.com/wiki/Sham-Pow!?oldid=923972"
Community content is available under CC-BY-SA unless otherwise noted.