Malea Emma
Olive Lestari is a former Sunshine Girl who is friends with Millicent.

Olive attends Ridgeway Junior High School with Millicent and was the stage manager at the production of Romeo and Juliet.

She is a former a Sunshine Girl and she briefly baked cupcakes for "Millicent's Minions", a cupcake business founded by Millicent.

Olive is a small child. She has dark hair that is often tied into two braids.

Olive is cheerful and pleasant. When mapping out her dreams, she drew a rainbow which represents "community and unity."

She is loyal and burned her Sunshine uniform after she quit the Sunshine Girls to join Millicent's Minions, a cupcake business. She is also hardworking and doesn't mind doing unpaid work. When helping Millicent make cupcakes, she wears a diaper so she doesn't need to take bathroom breaks.

Olive and Millicent are friends who attend Ridgeway Junior High School together. In iNeed Space, Olive and Millicent are Sunshine Girls, however, they later both quit to make cupcakes for Millicent's Minions. In iTake a Girls' Trip, Millicent mentions that she and Olive protested a frozen yogurt shop because they stopped carrying rainbow sprinkles. 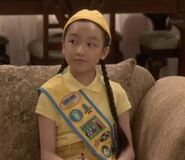