Minor ships on the show are ships that are possible, yet not given much airtime, due to the relationship being hard to develop if a member only has a recurring or unstable role on the show. Some of the characters are just one-time appearance characters.

Ships can either be platonic friendships or romantic relationships.

This ship is also sometimes referred to as "Bram"

Note: This ship most likely may not happen since Steven cheated on Carly with Tori Vega from Victorious.

Note: This ship did not happen, since Jonah did not come back. Also, Carly was mad at Jonah for betraying Sam.

Note: This ship did not happen, since they were both fired at the end of the episode. Also, Ashley's real personality has very little in common with Cort's.

Note: It is unlikely for this couple to happen since Fred only made one appearance on the show.

This pairing is sometimes called Meddie or Meleddie.

Note: This pairing did not happen because Melanie only appeared in one episode. 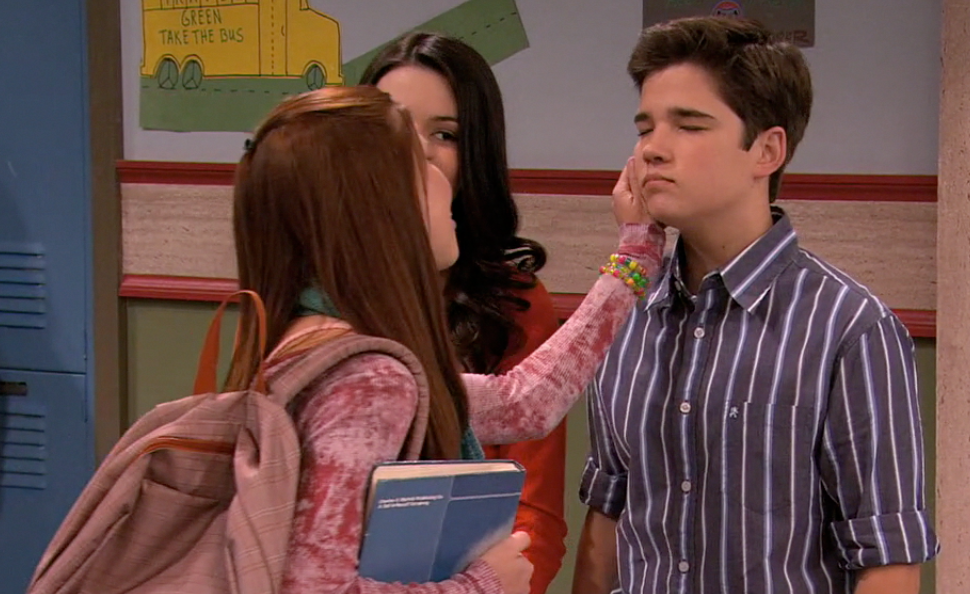 Note: This ship is extremely unlikely, since Jonah probably will not come back. Also, Freddie was mad at Jonah for betraying Sam.

Note: This ship is extremely unlikely because there probably will not be another iCarly-Victorious crossover.

There is no on-screen interaction between the members of this pairing (G/ibby Gibson and M/elanie Puckett). However, some people still ship them together, believing that they would make a good couple if they ever did meet. Some fans even theorize (though they know it's highly unlikely) that in "Sibby" moments, it was either Melanie disguised as Sam, or Gibby mistaking Sam for Melanie.

The official Gelanie color is pink (a "girly-girl" color), and the official fruit is a watermelon.

Note: Godi happened when they got married in iDo.

Note: It is unknown of whether this ship will happen or not because Reuben only made one appearance so far in the show.

Note: It is unknown if this pairing will happen, since Shelby only made one appearance on the show.

Note: This couple broke up at the end of the episode; Jonah only made one appearance throughout the series. Also, this ship is extremely unlikely, since Jonah probably will not come back. Also, Sam was mad at Jonah for betraying her and Carly.

Note: It is unknown if this couple will happen, but since Spencer's a ladies' man, they likely broke up before they really started. Also, Sasha has only made one appearance on the show.

Note: This couple might not happen, since Dan usually doesn't make characters stick around too long, but there is always a possibility.

Note: This ship most likely won't happen because Jodi is already married to Gordon.

Fendy in iReunite With Missy.

Bam kiss!
Add a photo to this gallery

The Bam Category on FanFiction.net

The Barly Category On FanFiction.net

The Belanie Category On FanFiction.net

iFarted-Carly has an embarrassing moment after an action by Freddie. Set in season 1. Some Ceddie, and some Cake. Cake. Rated K+. Written by BabySittersGroupie.

iLove Missy-Missy didn't go on the cruise because of her seasickness. Instead she stays in Seattle. Her true intentions are revealed to be a lot less sinister than replacing Sam. Instead she only wants to be the most important person in Carly's life. Carly/Missy Cissy. Rated T. Written by AZ Diamond.

The Fake Category On FanFiction.net

Eyes For Another-Tasha asks Freddie for advice on a camera for Gibby, but she has other things on her mind too. Fasha. Rated K+. Written by XxCreddieShipperxX.

iTwins Alternative Ending-What happened when Freddie found out that Sam and Melanie were twins at the end of iTwins? Felanie. Rated K.

Shawty Like A Meleddie In My Head-In a way she's sort of like that song "Replay." Once you hear it, you can't get it out of your head. Felanie. Rated K.

Breakin' Up is Hard to Do -Melanie's back! And she and Freddie are getting close. Really close. Why do Sam and Carly feel a bit strange about this? Could it be that they feel jealous? Couldn't be. Could it? So they come up with a plan to get Freddie back. Felanie. Rated T.Written by patricia51. iAm A CheekPincher-Wendy wonders what Sam has that she doesn't. But does Wendy really have anything to worry about? Or is she just misunderstanding what Freddie said? Fendy. Rated K. Written by PigSlay.

The Fourth Musketeer-Missy's return causes one problem for Carly, two for Freddie, and three for Sam. Friendships crumble, feelings change, and in it all two come together in spite of insurmountable differences. Seddie? Read on.Fissy. Rated T. Written by thewritershand.

Endlessly Unseen- Brad is turning out to be a great addition to the iCarly staff, but does he have his eye on more than just the webcast? If so, will that certain someone be returning the favor? Frad. Rated K+. Written by AccioJuicebox.

The Gelanie Category On FanFiction.net

The Gevel Category On FanFiction.net

The Jalerie Category On FanFiction.net

iAm Going to Kill You-After what seems like pleasant dreams of Mandy's death, Carly believes that maybe, just maybe, she had something to do with her sudden disappearance. One-shot with humor and drama. R&R Marly. Rated K+. Written by DarkAngelSnapeLover.

Shuck-"And there she was, the girl, the soul mate, the everything, all wrapped up into one little bodacious blonde. This was incomprehensible, this was forbidden, but clearly love wears converse and eats fried chicken." Chuck falls for Sam because…well…duh? Shuck. Rated K+ Written by thewerepuppy.

The Sissy Category On FanFiction.net

iAm Trapped by PsychoNora-Nora escapes from prison with her cellmate Jordan, making a devious plan to capture Sam. Jordan tricks the kids at Ridgeway by being the "new girl" and taking advantage of her good looks. Who is the only one to realize that Sam is missing? Seddie. Sora. Rated T.Written by Missterrie. iNever Forgot You-It's been one year since she lost her Pak-Rat throne, one year since she became second-best, one year since she received the kiss that changed her life... and she hasn't forgotten HIM for a moment. Spasha. Rated T IWant Sam -Wendy is very nervous and anxious. She really likes Sam but doesn't know if shes interested in girls. What is she gonna do? Wam. Rated T. Written by jennetteswagg

Up Close With Shelby Marx- "And now I can't help but think that all the crazy misunderstandings between us was leading me straight to her all the while, like she was pulling me back into the ring with her all over again." Sharly. Rated T.

Retrieved from "https://icarly.fandom.com/wiki/Minor_Ships?oldid=941118"
Community content is available under CC-BY-SA unless otherwise noted.