iCarly Wiki
Register
Don't have an account?
Sign In
Advertisement
in: One appearance only, Guest Stars, Adults,
and 4 more

Actor, comedian
Kenan Thompson (born May 10, 1978) is an American actor and comedian. He is best known for his work as a cast member of NBC's long-running sketch comedy series Saturday Night Live. He is also known for his starring roles in the films Good Burger and Fat Albert, his portrayal of Kenan Rockmore on the Nickelodeon sitcom Kenan & Kel, and as an original cast member of the Nickelodeon sketch comedy series All That. He ranks at #88 on VH1's 100 Greatest Teen Stars. Throughout the 1990s, he frequently collaborated with fellow comedian Kel Mitchell.

He was born and raised in Atlanta, Georgia, the son of Fletcher and Elizabeth Ann Thompson. He has one sibling, Kerwin Thompson. He began acting at age 15, appearing in the school play The Gingerbread Duck.[1] One of his earliest roles was as an entertainment reporter for CNN's "Fake News for Kids",[2] and he would go on to star in All That, and Kenan & Kel.[2] While Kenan attended Tri-Cities High School, a Visual and Performing Arts Magnet School in East Point, Georgia, he began filming his first movie, D2: The Mighty Ducks].

Kenan has starred in several films including Good Burger, based on the All That sketch of the same name, and Fat Albert, in which he played the title character. He has also had supporting roles in the movies Heavyweights, D2: The Mighty Ducks, Love Don't Cost a Thing, Barbershop 2: Back in Business, and Snakes on a Plane. Kenan had a recurring role on The Steve Harvey Show as Junior, with co-star Kel Mitchell. Recently, he returned to Nickelodeon for the show The Mighty B! as the voice of Rocky Rhodes.

In 2009, Thompson was a regular voice actor in the Fox cartoon series, Sit Down, Shut Up. He was voice acting principal, "Sue Sezno," who, as evidenced by her last name, always says no.[3] The series premiered on April 19, 2009,[3] but was canceled after only four episodes due to low ratings and less than favorable reviews. Thompson provided the voice for the LeBron James puppet in Nike's MVP "Most Valuable Puppets" commercials, which were produced to be shown throughout the 2009 NBA Playoffs. Thompson also guest starred on the USA Network TV show Psych, Season 4's "High Top Fade Out" (episode 7). He played an estranged college singing buddy of the character Gus. In 2011 he briefly returned to Nickelodeon, as he guest starred in "iParty with Victorious", a crossover episode of TV sitcoms iCarly and "Victorious". Thompson is the current host of TeenNick's 1990's programming block, The '90s Are All That. It should be noted that he is on Saturday Night Live, and has many recurring sketches where he stars, including, "Getting Freaky" and "What Up With That?"

Role in iParty with Victorious

Kenan Thompson appeared as himself in iParty with Victorious. He bought a house from Andre Harris' uncle and allowed Andre to have a "small" party. Andre invites his friends to the party but word leaks out about party and over 200 people arrive. Kenan comes to the party, and Andre thinks he will be angry, but he isn't. While the party had over 200 people, Kenan defined a small party as 400-500 people.

However, an old enemy of Kenan, The Panda crashed the party so Kenan and Andre tried to stop him, although they didn't manage to.

Kenan met the iCarly crew (and Tori Vega) when he was trying to chase The Panda, and they asked him for help for revenge on Steven Carson. When Steven entered the closet (supposedly to have his hundred day kiss with Tori), Kenan blew a trumpet at him and humiliated him on iCarly.

At the end of the episode during the song "Leave It All To Shine" (a combination of the iCarly theme tune "Leave it all to me" and the Victorious theme tune "Make it Shine"), he suddenly barged in the room and sang the line "I'm telling you just how I feel." 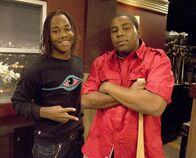 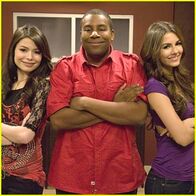