Kelly Cooper: Terrible Movie was a sketch on a webcast of iCarly shown only in the episode iKiss. It was inspired by Carly and Sam's return trip from a lame teen romantic comedy, The First Kiss, in the vein of She's All That, and its subsequent clones. The sketch is a parody of the trailers that are typical of such terrible movies.

The story begins with a klutzy girl named Kelly Cooper (Carly Shay) who desperately wants to become popular. However, there is a mean girl named Natalie (Sam Puckett) who doesn't want her to fit in with the popular crowd. Kelly then changes her outfit style and tries out all sorts of other clothes, and eventually met the boy of her dreams, Chad (Gibby Gibson). In the end, Kelly has a party, and a surprised Natalie shows up and is shocked to see that she was beaten by Kelly. She is mocked by Kelly and Chad, and she runs away, screaming.

Chad was Kelly's boyfriend, this is one of the main suggestions of Cibby. 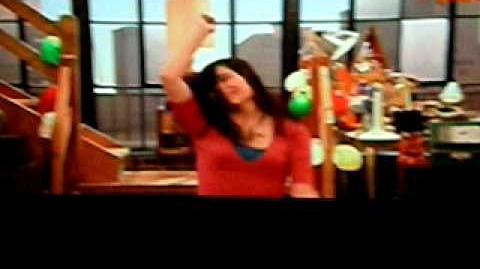 Orenthal Cornelius Gibson as Chad
Add a photo to this gallery
Retrieved from "https://icarly.fandom.com/wiki/Kelly_Cooper:_Terrible_Movie?oldid=872519"
Community content is available under CC-BY-SA unless otherwise noted.