Start a Wiki
Jathan is the pairing of Jennette McCurdy and Nathan Kress (J/ennette + N/athan). It is also very rarely called Nennette, Jennath or Jennathan. Jennette and Nathan are best friends. They have also confirmed that in various articles and magazines. Jathan has nothing to do with Seddie as Seddie refers to the pairing of Sam Puckett and Freddie Benson, the characters that they play. [1]

Note: In the Ustream Nathan stands next to Miranda and behind Jennette. However Nathan & Jennette are focusing on other things.

Note: Nathan and Jerry co-starred in the same episode of Penguins of Madagascar. Jennette co-starred together in the following episode of the show

Note that Dan coincidentally put Miranda, Jennette, Nathan and me in that order he put Nathan's name after Jennette's and in most of his run-thru videos Nathan and Jennette often sit or stand next to each other

Note: Max Ehrich will guest star as Adam a possible love interest for Miranda's character Carly. He is long-time friends with Miranda, Jennette and Dan Max is reportedly often goes out to lunch with Miranda and Jennette (sometimes just with Jennette) but is reportedly dating actress and his former co-star Sarah Hyland [2]

Note: In this video here Nathan and Jennette both look at Miranda twice at different times and have similar expressions and similar smiles when they notice Dan. They also appear to be having a short conversation. Nathan and Jennette also stand next to each other

Note: Nathan said See that wasn't so bad after IKiss which he also said something like that to co-star Miranda Cosgrove. Nathan and Jennette have kissed on-set a few short times for IKiss & ITwins to make this kiss appear longer in the episode 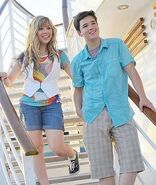 Add a photo to this gallery

Retrieved from "https://icarly.fandom.com/wiki/Jathan?oldid=156390"
Community content is available under CC-BY-SA unless otherwise noted.