iParty with Victorious[1] could be the 10th-12th episode of Season Four, and 80th-82nd overall. It is the season's second double episode/TV Movie/Special. It will include various guest stars from Victorious including Victoria Justice as Tori, Leon Thomas as Andre, Matt Bennett as Robbie, Elizabeth Gillies as Jade, Ariana Grande as Cat, Avan Jogia as Beck, Daniella Monet as Trina and Kenan Thompson as Himself. The episode was first known as iCarly-Victorious Crossover in the working title. Dan also tweeted that Gibby will join Spencer, Sinjin, and Sikowitz in the hottub.

Dan Schneider confirmed this episode on his Twitter and Facebook page on August 21: "Sorry I've been quiet for a few days. I'm CRAZED writing a major iCarly episode AND the iCarly/Victorious crossover. HUGE TASKS. But fun!" [2]

According to a DanWarp tweet, Jennette McCurdy is going to sing on this episode. [3]

In a ClevverTV interview, Jennette McCurdy mentions, that she is, "going to throw some rap in the pop".[4]

In a ClevverTV interview, Avan Jogia(Beck, Victorious) says there will be guest stars, and during the crossover he will be spending a lot of time in a hot tub with Eric Lange( Sikowitz, Victorious), Jerry Trainor(Spencer, iCarly), and Elizabeth Gillies(Jade, Victorious) [5]

In an interview with Zang Radio, Ariana Grande says Cat doesn't talk for the whole time, but she does do something. When asked what it was, she replied, "You'll see." [1

There is said to be a love feud in the exact same interview. 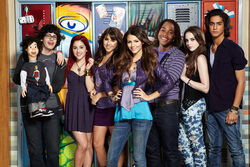 Carly is dating a boy named Steven who divides his time between his divorced parents who live in Seattle and Los Angeles. Meanwhile, Tori is also spending time with her new boyfriend who, unbeknownst to her, is the very same boy Carly is seeing.

Elsewhere at Hollywood Arts, Andre is psyched because Kenan Thompson has offered to let him throw a small party in his awesome new house, but the party spirals out of control when Rex sends a mass tweet.

Retrieved from "https://icarly.fandom.com/wiki/IParty_With_Victorious?oldid=178908"
Community content is available under CC-BY-SA unless otherwise noted.