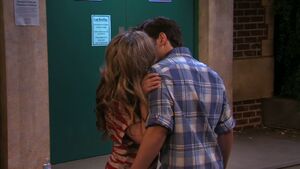 iOMG is an iCarly story arc chronicling the change of Sam and Freddie's relationship from frenemies to girlfriend and boyfriend. The story arc officially begins in the episode "iOMG" where it is revealed that Sam is in love with Freddie by passionately kissing him while Carly watches through the window. The story arc continues in "iLost My Mind", where Freddie reciprocates these feelings by kissing her live on the webshow.

The story arc was preceded by 4 seasons and years of Creddie and Seddie hints and shippings. Over time, the Seddie ship became the most popular of all, further fueled by a kiss between Sam and Freddie in "iKiss" and a subsequent increase of same interests between the two. Since iCarly creator Dan Schneider wrote the episodes, it can be indicated that he was inspired by the popularity of the Seddie fanbase to show the audience what would happen if Sam and Freddie began dating.

During production of "iOMG," Dan Schneider presented a fake ending to the episode to the entire cast, then later showed Jennette McCurdy and Nathan Kress the real ending in secret. Miranda Cosgrove did not know about this until she walked on set and witnessed what was going on while the ending was being shot.

Events leading up to iOMG

During much of the show's early episodes, Freddie makes strong hints about his crush on Carly, and seems to hate Sam at the time of iCarly's launch. The feeling is almost mutual for Sam, seeing as she taunts Freddie's unrequited crush, although she gets even more angry when she sees any girl who dates or is attracted to Freddie.

In "iKiss," Sam overhears Freddie confessing to Carly about never having a first kiss. She then announces his secret live on the webshow, making Freddie feel embarrassed to the point of sitting on the fire escape alone. Carly makes Sam feel bad about spilling the secret, so Sam then publicly announces herself that she has never kissed anyone either. She goes to talk to Freddie and apologises for everything that's happened between them, but states that she'll still mess around with him, apologising every now and then to start fresh. Freddie states that his life would be too weird if she didn't make him feel miserable all the time. Sam then brings up the subject of first kisses and they both talk about how they wish they would get it over with. Sam then guesses that Freddie is thinking about them kissing each other. They both decide to do it, just to get it over with. After they kiss, they keep to their promise not to tell anyone about the kiss.

In subsequent episodes, Sam and Freddie appear to have toned down their dislike towards one another, possibly due to some awkwardness from their kiss, and begin to share common interests with each other, such as MMA fighters and cooking shows. This increases towards the start of the third season, where Sam and Freddie begin to think of this as too much of a regular thing and become annoyed at this.

In "iThink They Kissed", Carly takes Sam to the dentist, who, under the influence of laughing gas, confesses the kiss between her and Freddie. When Carly tells Freddie what Sam said, he quickly changes the subject causing Carly to attempt to pin him down just to get him to confess. Freddie then says it's true, so Carly then asks Sam and Freddie to come to her apartment without telling each other and when they arrive, she confronts them about keeping the kiss a secret from her. In the end, Sam and Freddie decide it's time to stop keeping secrets and tell Carly that they'll tell each other everything. When Carly asks them if they enjoyed the kiss, they exchange awkward and heartfelt glances at each other.

In "iSpeed Date", Carly, Sam and Freddie get involved in potential dates for the Girls' Choice Dance, all of which end badly. Sam sets Carly up on a speed-dating contest, with the winning date constantly interrupting her before she yells at him to leave. Sam reluctantly asks Gibby to the dance, only to find out he has a girlfriend named Tasha. Freddie is forced to go on a date with a magician, who performs weird tricks and disappears after the date. Carly and Freddie decide to dance together at the Groovy Smoothie. It is at this moment that Sam walks in and sees them. Upon seeing them, she silently walks away.

In "iSaved Your Life", Freddie pushes Carly out of the way of an oncoming taco truck on the road, saving her life and getting himself injured in the process. Carly is so grateful that she visits his room often to take care of him and at one point kisses him. In just hours of Carly and Freddie beginning their relationship, Sam tells Freddie, based on her experience with a boyfriend who sent her bacon, that Freddie is Carly's bacon, that she only loves him for what he did. Freddie doesn't believe her at first, but later that night, at Carly's apartment, he realises that this may be true and tells her this. The two end their short relationship, but decide that once the whole "hero" thing wears off and if Carly is still attracted to Freddie because of who he is, they will try the relationship again.

In "iHire An Idiot", Freddie and Sam discover their ideal iCarly intern, Brad, and favor him for his nice attitude and a handy skill for technology and cooking fudge. When Carly and Sam unexpectedly hire a hot, although not very bright, guy named Cort as their intern, Freddie, hurt that they would make this decision without him, hires a Pear Store employee to pose as a dumb intern to get Sam and Carly to fire Cort.

In "iOMG", Carly, Sam and Freddie finally hire Brad as their intern, and when Freddie and Brad decide to work on their school project, a MoodFace app for the PearPad, Sam offers to help. Reluctantly, a confused Freddie accepts her help. She also starts hanging out with both of them whenever she gets the chance, even helping them with the project at the school lock-in. Freddie tests the MoodFace app on Sam, which confirms that she is in love, but not with whom. He hides this result from both Sam and Brad, and goes to show Carly the result of the test. Thinking that Sam still hates Freddie, he and Carly misunderstand the results, believing that Sam is in love with Brad, and Carly takes great steps into proving this, by leaving Sam and Brad in the same room alone together. Sam still tries to convince her that she is not in love with him though. Carly states that she knows Sam wants a nice boyfriend, and tries to encourage her to make a move, knowing that it would make her happy. Freddie later finds Sam at a school corridor and gives her a heart-to-heart talk about opening up and taking a risk when it comes to romantic feelings. In the middle of the talk, Sam grabs Freddie and kisses him passionately, revealing that in fact he is the one she is in love with, as a shocked Carly watches through the window.

In "iLost My Mind", Freddie expresses his concern for Sam, and Carly reveals that she saw her kiss him three days ago, and questions him on why he didn't tell her. He says it's because he doesn't know what the kiss meant. With the help of a PearPhone-tracking website, Carly and Freddie discover that Sam has checked herself into Troubled Waters Mental Hospital. When Freddie visits Sam, he listens to her confess to him that not only did she check herself in because she hates him, but also that she kissed him because she really likes him. She thinks that she's lost her mind because she doesn't know how to handle the situation. When Freddie convinces her otherwise, she tries to return home, but cannot as neither of her parents are there to sign her out. Carly, Sam and Freddie decide to do iCarly live at the mental hospital, when Carly announces the opening of a video chat to debate over whether Sam is crazy for liking Freddie. Freddie then announces that nobody has asked him how he feels about Sam, and mentions that his opinion is important, too. Sam urges Freddie to use this opportunity to get back at her, but he goes and passionately kisses her. Sam is left wondering where this will take them.

Sam is soon released from the mental hospital some time before "iDate Sam & Freddie", and begins dating Freddie. Sam first calls Freddie her boyfriend noted by the line, "This is not how boyfriends behave." A small conflict between them over Sam filling Freddie's teacher's car with bees in revenge for him not giving Freddie the perfect grade, which Carly helps solve, begins to expand into numerous disagreements, e.g.: over if girls should expect guys to pay for their food and if guys should pay for the food, which escalate into huge arguments; e.g.: who's mom is freakier, to the point of arguing over which bit to do live on the web show. Carly soon tires of being the constant relationship mediator between them, so when she witnesses an argument over food and table manners, she decides she's had enough, and proceeds to walk over to their table to mock their restaurant habits. She says that either they work things out themselves or they shouldn't be dating at all. As she walks off, Sam and Freddie start to contemplate what to do in their relationship.

In ICan't Take It a week later after IDate Sam & Freddie. Sam and Freddie's relationship has gotten immensely better. They've only had three fights that week and Sam hasn't hit Freddie in the face. Freddie wonders why he didn't get into NERD Camp. It is soon revealed by Mrs. Benson, who with the help of Carly and Gibby have been trying to break Sam and Freddie up. Sam apologizes and Carly feeling guilty pushes them together until they kiss and make up. They are still together and Freddie referred to Sam as his girlfriend noted by the line in his blog "You have to admit. I have a pretty funny girlfriend."

During ILove You Sam and Freddie explore each other's interests and favorite hobbies. After overhearing a conversation Carly has with Spencer and his old babysitter, they start to believe this may apply to them as well. The two later agree to break up. However, as Sam is walking out of the elevator, Freddie tells Sam he loves her. Sam replies that she loves Freddie, too. The two kiss, and then agree that "it's only 10:30" and they decide to break-up at midnight after they finish kissing in the elevator.

Retrieved from "https://icarly.fandom.com/wiki/IOMG_(story_arc)?oldid=864592"
Community content is available under CC-BY-SA unless otherwise noted.