After Mrs. Benson embarrasses Freddie on iCarly (by reprimanding him for not eating his asparagus and then forcing him to eat them on the live webshow) and in school (showing everyone his baby pictures after assuming they all are his friends), he grows frustrated with her babying ways. When his mother tries to clean out his ear with a vacuum while he was sleeping, Freddie finally decides to move out to an unused room in his apartment building. Although it is decrepit, and costs $100 a month to rent, Freddie is satisfied to be free of his mother. His mother commands him to return home (and eat a "prune pop" that she brings to his apartment), but Freddie stands his ground. After Mrs. Benson promises to respect Freddie and agrees to his conditions the next morning, they hug and he moves back home. His conditions are that she treats him like he is as old as he is, and that she unlocks all the TV channels (but Mrs. Benson is reluctant to unlock the nature channel, although she does do so).

Meanwhile, Carly, Sam, and Freddie try to get revenge on the Petographers, Stewart and Ollie, a group of pet photographers, after they vandalize the iCarly studio when they learn that Carly and Sam have been giving makeovers to pets and taking photos of them. The police also refuse to help because one of them suffered from Spencer's antics and because the Petographers don't charge cops. Sam said that they should just rebuild the studio and continue taking pet pictures, until Carly and Freddie points out that if they do, then the petographers will come back vandalize the studio again and won't leave them alone. They are unable to ruin the Petographer's studio, but Sam decides to steal their cat, Harmoo, as ransom. They email both Stewart and Ollie, and told them if they want to have Harmoo back, they will clean up the mess they made and never bother them again, but warned them that if they called the police, they will shave the cat. After they rebuild the studio, Spencer says that Harmoo attacked him in his face and then jumped out of the window. Freddie calls, saying that he can see the cat from outside his new apartment on the windowsill. After several failed attempts at coaxing Harmoo back, they realize that since the cat always attacks Spencer's face when he sees him, they can use him as bait to bring Harmoo in. Spencer reluctantly agrees, and it works. Spencer is left with bloody scratch marks, and the petographers hurry out without saying thank you.

View Gallery for this episode here.

Spencer: I would go ice skating every night.
Carly: Except now we can't, because we've been banned from the Frozen Oval.
Sam: It's not my fault that big guy kept bumping into me.
Carly: So you had to jack slap him in front of his kids!

Gibby: [to Freddie] Hey Freddie, guess what they're serving in the cafeteria tomorrow?
Freddie: [sarcastically] Oh is it asparagus? cos that'd be sooo hilarious!
Gibby: No it's fishsticks. What's your problem? [walks away]
Freddie: Hey I'm sorry!
Gibby: [sarcastically] No, I'm sorry!

Freddie: It's all my mom's fault. Don't you think she's a lunatic?
Carly: Totally. You know she's outside in her car waiting for you?
Freddie: Yeah let her wait.
Carly: There you go!
Freddie: What?
Carly: Your mom pushes you around and treats you like a baby cuz you let her.
Freddie: Well not anymore. She's gonna have to deal with the fact that I'm a man now!
Carly: [sarcastically, to herself] "man..."

Mrs. Benson: I've been waiting outside for nine and a half minutes.
Freddie: So?
Mrs. Benson: So? When you were ready to be born did I keep you waiting?
Freddie: Yes. You were pregnant with me for 11 months!
Mrs. Benson: I wanted to make sure you were done!

Officer Carl: So what do you want us to do?
Sam: What do we want you to do?
Carly: We want you to arrest the Petographers for vandalizing our studio.
Sam: But taze em first!
Spencer: Yeah, taze em hard!
Officer Carl: [to Spencer] What up with your face?
Spencer: I told you, their possessed cat attacked me!
Officer Carl: Harmoo? hes just a pussy cat.
Spencer: No he is not, just a...
Carly: [stops Spencer] Wait, how do you know their cat's name?
Sam: Are you friends with those guys?
Officer Carl: I know them. They took some very nice photos of my daughter's bunny. For free.
Carly: Why didn't they charge you?
Officer Carl: Cause I'm a cop, and the Petographers don't charge cops.
Spencer: [sarcastic tone] Oh, so that means they can just break into our apartment, [louder] TRASH THE PLACE AND YOU DON'T EVEN CARE?!
Officer Carl: Watch the attitude. I haven't forgotten about "Pee on Carl"! [gives Carly a ticket] here.
Carly: You're giving me a ticket?
Officer Carl: Yes. [points to the car] That vehicle has no license plate.
Carly: It's a prop.
Officer Carl: So are you. Show us out please.
Carly: He called me a prop.

Sam: Hey... there's no bathroom in here.
Freddie: There's a sink.
[Both Carly and Sam shudder in disgust]

Sam: Wow, you can actually feel the awkward.

Freddie: Please don't try to talk me into moving back in with you.
Mrs. Benson: Oh, I won't. Actually I think that living on your own will be a positive thing for you. Perhaps you'll even--YOU GET UP TO YOUR ROOM THIS INSTANT FREDDIE BENSON! I AM YOUR MOTHER, AND YOU'LL DO AS I SAY!! 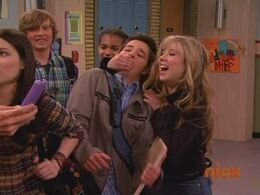 Freddie: You kidnapped Harmoo?!
Sam: How great am I!

Mrs. Benson: [Talking on the phone] I need to report a missing little boy...he's fifteen...well that's little to me!

Freddie: [angrily, holding the tube] Mom, you tried to vacuum my ear while I was sleeping?!
Mrs. Benson: Please let me finish!
Freddie: No! you treat me like a child and I'm not gonna put up with it.
Mrs Benson: And what does that mean?
Freddie: [Screams] I'M MOVING OUT! [storms out the room]
Mrs Benson: [Runs behind him] Freddie, Freddie!
[Spencer comes out of his room and sees the de-waxer on the table]
Spencer: [puts the tube up his nose] This is fantastic!

Retrieved from "https://icarly.fandom.com/wiki/IMove_Out?oldid=940703"
Community content is available under CC-BY-SA unless otherwise noted.