iGet Pranky is the third episode of Season Four of iCarly, and 73rd overall.

After showing a prank video on iCarly, Carly admits that she has never pranked anyone. Sam and Freddie urge her to do it, so Carly tries to prank Gibby, but fails.

Carly asks Spencer for help, but he is afraid because of a past experience fourteen years ago; in the ninth grade, he was known as "the king of pranks", but he got carried away and couldn´t stop pranking people. Eventually, he stopped when one of his pranks hurt his classmates (he made garlic powder rain down on them and they had to get their eyes flushed). Carly talks him into helping her pull a prank on Sam and Freddie (by setting up a covered tray table that looked like it came from Nevel, but is really Carly's head poking through it), but after they succeed, Spencer becomes addicted to pranking again. Carly, Sam and Freddie try to talk sense into him, but it doesn´t work. An attempt to prank him back results only in Gibby breaking his arm.

Carly then has the idea to call Spencer´s former classmates that were hurt by his garlic powder prank, and they actually come to remind him of what happened to them. When Carly goes to get her video camera to record the talk, Spencer´s old classmates beat him up instead and Spencer stops pranking.

In the end credits, Gibby is cross-dressing and beatboxing with T-Bo. This is a shortened version of the video on iCarly.com.

View the Gallery for this episode here.

Sam: Sorry Gibbles, but you were standing in ...


Carly & Sam: Random hair!
Carly: From the floor of Manny's barbershop.
Sam: Manny's, snippin' and sizzin' for over 20 years, heyyyy.
Freddie: Bald people not welcome, [imitating Sam] heyyyy.
Gibby: So what do I do now?
Carly: It's time for you--
Sam: To get on outta here!.

Sam: Show 'em the prank, Fred-wiener!
Freddie: Sure thing, Sam...jerk.
Sam: And that's why you're behind the camera.

Sam: Come on, dude. You're like way too old to have never pulled one prank. 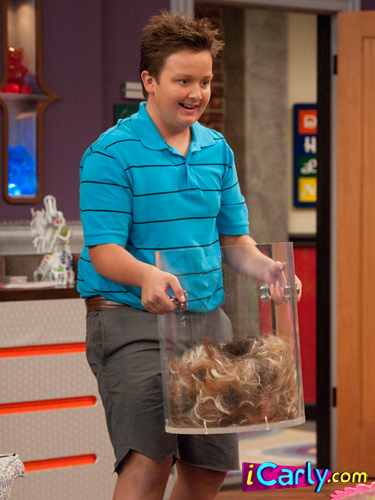 Gibby : [On the phone] Hey, Dad, fire up the grill! I'm bringing home a trout!
Student : A fish?
Gibby : MY FISH! [runs out the door] MY FISH!
Carly : Well, I kinda got him.
Sam : You got him dinner. [Walks away with Freddie following behind]

Megan: [on TV] Ok, that was good revenge, too. And by the way, you didn't kill Hurvey, the camera flash just stunned him.
Carly: [on her couch] How come that little girl's so good at pranks?

Spencer: [wearing a hat made out of a lot of spoons] Look, I made a spoon hat.
Carly: Well, that explains why I'm having to eat my soup with a fork...

Spencer: Nothing's stupid to a guy in a spoon hat.

Carly: Sign it!
Spencer: I don't even know what this is!
Carly: It's a contract that says, "I, Spencer Shay, hereby promise to never prank anybody again as long as ye shall live.".
Spencer: What is "ye"?
Carly: "Ye" is you, it sounds official! Sign it.
Spencer: And what if I don't?
Carly: Well then I might sneak into your room tonight and push a pillow over your face till you stop kicking.
Spencer: ...That's some pretty dark stuff.

Sam: Dude, if I didn't have a little crush on you, you'd be falling for my baseball-bat-in-your-face bit!
Carly: Little crush?
Sam: Did he sign the contract or not!?

Spencer: So, [in a playful voice] you guys want me to sign your pretty little contract promising I won't pull pranks anymore... Will that make the little children happy?
Carly: Yes!
Sam: Kinda.
Freddie: Ocho. [ocho is 8 in Spanish]

Gibby: True chiz! I'm still afraid to pee! I looked up catheters, and do you even know where they--
Freddie: [disgusted] Oh! Oh! Oh!
Sam: Get climbing! Get climbing!

Carly : What are we gonna do?
Sam : I told ya! You guys tell Spencer we're going bowling, and then I sneak up behind him--
Carly : Put the nunchuks away!!!

Spencer: [about signing the contact] And what if I don't?

Carly: Then maybe, I'll sneak into your bedroom tonight and push a pillow over your face so you'll stop kicking!

Retrieved from "https://icarly.fandom.com/wiki/IGet_Pranky?oldid=946570"
Community content is available under CC-BY-SA unless otherwise noted.