View source
watch 01:36
We're Getting Mutants in the MCU - The Loop
Do you like this video?
Play Sound

iFight Shelby Marx is the 24th-25th episodes of iCarly and the 49th and 50th episode overall. It is the season finale of Season 2.

After seeing MMA-fighter Shelby Marx win the female CFC-title as the youngest person ever, Carly jokingly challenges her to a fight on "iCarly." However, the paparazzi twists the fake-challenge to make it seem like Carly really is challenging Shelby. Much to Carly's horror, Shelby shows up at the apartment, saying she's ready to fight. Carly ends up running away from her knowing that she is going to get beat up. Shelby assures her that she's not angry nor offended by Carly's challenge, and simply wants to hold an exhibition match with her for publicity and charity for both of them. Although Carly is deeply worried about it, she agrees when Shelby and Sam assure her that she won't be hurt.

At a press conference before the fight, Sam starts a riot by trash-talking Shelby, and Carly is pushed onto Shelby's ailing grandmother. Shelby, thinking that Carly has purposely attacked her, is furious and wants to seriously hurt Carly. Carly cancels the fight out of fear, but afterwards, she is ridiculed by her classmates and Nevel. She manages to calm Shelby down and explain what happened with her grandmother was purely accidental they agree to the exhibition fight again.

Nevel, seeing a chance to cause trouble for iCarly again, manipulates a video of the press conference to make it seem like Carly and Sam planned to push down Shelby's grandmother. Shelby is furious again and attacks Carly for real during the fight. Carly manages to get over the scheduled three-minute round by holding onto Shelby's leg and flees as soon as the door to the cage is opened.

When Shelby finds and confronts Carly, Shelby tells her about the kid who showed her the video of the press conference and the iCarly team comes to the conclusion that it is Nevel, tricking her in believing that Carly did attack her grandmother. After Freddie and Gibby find him, they pull him into the ring, where the girls, Carly, Sam, and Shelby, beat him up (off-screen).

In the end, Shelby appears on an iCarly webcast to do a spontaneous spit take.

Spencer decides to take experimental allergy pills that have numerous side effects such as itching, sweating, constant thirst, short term memory loss, and muscle spasms. His spasms make him whip spaghetti around, hit Gibby's popcorn bucket, and accidentally smack Shelby which makes her hit him back. 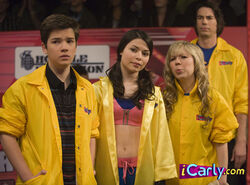