View source
watch 01:55
Cobra Kai Season 4 - The Loop
Do you like this video?
Play Sound

Spencer's motorcycle gets stolen by a new boy in the building named Griffin. Carly strongly dislikes him, but Spencer "takes Griffin under his wing" (in sculpting), much to her dismay. In a short span of time, however, she grows to like him and kisses him. After Spencer walks in on them kissing, he grounds Carly "for till college." Carly deceives Spencer and tries to see Griffin at any time possible. Eventually, he gives his blessing for them to see each other.

Griffin invites Carly to his house, and she is shocked to learn that he collects and obsesses over Pee Wee Babies. She tries to break him of his habit but is unsuccessful in doing so. When she attempts to accept his weird hobby, she ends up laughing about it with Sam. Griffin overhears and asks if she wants to break up but she is unable to respond (she's distracted by imagining PeeWee Babies revolving around his head and talking to her), so he just leaves. When Sam suggests she chase after him, Carly just accepts the end of their relationship.

Sam asks Freddie to make a website for her in order to put up all the disgusting videos she collected, which he does. But when Sam becomes too demanding, constantly asking to make many changes to the site, he rips up the contract they made. Sam then sells the website to a guy named Sam Puckett and makes $1,000, leaving Freddie with nothing but a dollar that Sam gives him to buy himself a bagel. (Had Freddie kept the contract, he would have gotten half of the profit.)

Sam has a recurring nightmare where a monster eats her soup, so Spencer tries to help her get over her fear. When Spencer dresses up as a monster to find out Sam's reaction, she beats him (as shown in one of the opening credits of season 3) and Spencer ends up having the nightmare instead of Sam. 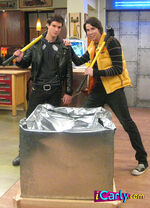