Ginger Fox, (born 1984), is a fictional American singer portrayed by Betsy Rue in the episode, iFix a Pop Star, which is the only episode she appeared in. She is also a parody of Britney Spears. The music video for Fox's song, "Hate Me, Love Me," was the number one most viewed video of all time. Afterwards though, Fox eventually suffered a mental breakdown and stopped working for years. According to the iCarly gang, she has no talent whatsoever (cannot sing, dance, keep a rhythm, etc.), but a lot of fans still love her. Fox made her comeback seven years later during a live performance at the Pop Music Awards, singing her single, Number One, with the help of the iCarly crew. Although Fox was not lipsyncing very well and "marching around the stage like an idiot", she made a surprisingly popular comeback and was a big hit, much to the confusion of the iCarly gang. Fox has also been mentioned several times in the Victorious episode, "Freak the Freak Out," when Haley and Tara sing Ginger Fox's song Number One, and later, Hate Me, Love Me.

Fox's son, Billy, (who Carly, Sam, and Freddie have to babysit) is shown and her ex-husband is mentioned but other than them, none of her other family members are mentioned.

Fox has major anger issues as a result, and once threw a fork that landed on Freddie's shoulder in a fit of rage. She is very lazy and unmotivated, have no interest in putting any effort into her comeback. Despite this Fox is highly egotistical, believing that she is still a big star. In reality during rehearsal, Fox sang terribly, not even trying to hit and remember all the right words and notes, and she couldn't even dance to the rhythm.

According to Sam, Fox was once voted Sexiest Woman of the Year, but now no longer cares about her appearance; Fox's armpits are not shaved and, during the concert comeback, the iCarly crew has to hide her behind smoke. It's said on iCarly.com that Fox hasn't shaved her armpits in 4 years - since her last #1 hit. 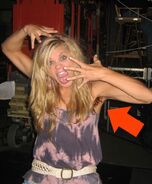 Add a photo to this gallery
Retrieved from "https://icarly.fandom.com/wiki/Ginger_Fox?oldid=940862"
Community content is available under CC-BY-SA unless otherwise noted.