The Cam Friendship is the friendship pairing of Carly Shay and Sam Puckett (C/arly and S/am). Carly and Sam have been best friends since they were eight years old, and it's a major component of the show. Many storylines focus on the development of their friendship. Their unbreakable bond is a force to be reckoned with. Many fans celebrate this friendship, while respectfully disagreeing with others that there is any romantic attraction between the two. Even though they are not the same, they are great/best friends. (See: Cam Relationship.)

Carly and Sam's friendship is one of a few canon pairings on the show. It is the main friendship on the show, as they are as close as sisters, who look out for each other. 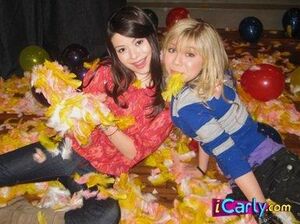 Remember, this page is only for the friendship aspect between Carly and Sam, not the romantic pairing. They are best friends.

Carly and Sam met when they were only eight years old, after Sam tried to steal Carly's tuna sandwich during a lunch break. Carly refused to give it up when Sam was trying to take it. Carly retaliated, and this impressed Sam and she said, "You're alright". Due to her "vicious, but lovable" nature, she tells Carly that she's an "all right kid," and Carly allows her to sit with her at lunch.

Five years later, they are still friends to this day, and their friendship continues to grow stronger. Although they are very best friends, Carly thinks that Sam's a nightmare, obnoxious, irresponsible, etc.

Throughout the series, Carly has acted as a moral guardian for Sam, as Sam's mother appears to have poor parenting skills. Carly lends Sam her clothes, allows Sam to stay in her place and feeds Sam more than her mother does, as shown in the show. Carly loves Sam for who she is, but will put her foot down when Sam goes too far. Carly is the only person who can control Sam's aggressive behavior. As revealed in iChristmas, Sam would have wound up in a juvenile detention center (Juvie) if it weren't for Carly's moral guidance. Carly is the only character in iCarly who Sam has always acted civil towards.

Although some may disagree, Carly also would be affected adversely as well if she never became friends with Sam. The episode iChristmas also shows that if Carly and Sam weren't friends, Carly would have a considerably more boring life (i.e.: she'd date Nevel Papperman, wouldn't be friends with Freddie, and iCarly wouldn't exist). This seems to ring true throughout the entire series of the show. In their friendship, Sam's always been the humorous, daring one, and her free-spirited nature seems to bring spontaneity and fun to Carly's otherwise normal life. In terms of this aspect, their relationship is balanced and not one-sided as some would think.

Carly: "You know, anybody but me would punch you right in the head."
Sam: "Which is why you're my best friend!"
Carly: "Good to know... now why are you mine?"
Sam: "Because I'm a lovable person!" (Pushes a kid into a locker)

Carly: "What have I told you about kidnapping?"
Sam: "It's illegal and rude."
Carly: "Good girl."

iLost My Head in Vegas

Carly: You know, anyone but me would punch you right in the head.
Sam: Which is why you are my best friend!
Carly: Good to know. Now why are you mine?
Sam: Because I'm a lovable person! [knocks a kid into the lockers]
(iPilot)

Carly: When's your mom gonna pick you up?
Sam: She's not, I told her I'm spending the night.
Carly:{smiling] I didn't invite you.
Sam: Well you should 'cos I'm not leaving!
(iPilot)

Sam: [about the world record book] This thing is full of top-notch freaks, mutants and psychos!
Carly: All your favorite things!
Sam: I know!
(iWant a World Record)

Sam: Hey, can I sleep over tonight?
Carly: You don't want to go home?
Sam: Nah... When my mom buys a new bikini, she usually likes to wear it around the house for a few days to "break it in." If you're my friend, you won't make me look at that.
(iAm Your Biggest Fan)

Carly: You should ask him to hang out!
Sam: Nah, a guy like that wouldn't want to hang out with someone like me.
Carly: Why not? He makes chicken noises and bothers other children. He's perfect for you!
(iHate Sam's Boyfriend)

Sam: I am wearing this hideous shirt because I got us these. [Pulls out tickets]
Carly: Oh, my God!
Sam: Yeah-huh.
Carly: Cuddlefish tickets!
Sam: Yeah, baby. Let it out!
Carly: *screams*
(iDon't Want to Fight)

[After Sam suggests kidnapping Mr.Howard]
Carly: What have I told you about kidnapping?
Sam: It's illegal and rude.
Carly: Good girl.
(iGot Detention)

Sam: I'm not going!
Carly: Oh yes you are! You wanna know why?
Sam: Why?
Carly: Because when your mother got chicken pox, I helped you rub calamine lotion all over that woman... And those pox were everywhere....
Sam: You're a good friend....
(iWin a Date)

Carly: Hey, I thought you were Freddie.
Sam: If anyone else said that to me, I'd punch 'em in the mouth.

Sam: Oh, man. I got another of those chain letter e-mails from Gibby.
Carly: Well, you better forward it, or you'll have all kinds of bad luck, just like Freddie did.
Sam: Freddie didn't have any bad luck.
Carly: What are you talking about?
Sam: I did all that stuff.
Carly: What? Wait. His bike falling apart?
Sam: I loosened some bolts.
Carly: His laptop smoking?
Sam: Shorted out the battery.
Carly: The pink shorts?
Sam: One red sock in his washing machine.
Carly: Okay, what about the spider on his face?
Sam: That was just lucky.
(iStage an Intervention)

Carly: And how would I know your mother has a tattoo on her foot?
Sam: A tattoo of what?
Carly: A foot!
(iChristmas)

Sam: What's my favorite color?
Carly: Brown.
Sam: Why?
Carly: It's the color of gravy!
(iChristmas)

Sam: Those Dingo people are dead!
Carly: What are we going to do?
Sam: We're gonna find them and kick them in their dingoes!
(iTake on Dingo)

Sam: May I get swingy?
Carly: Yes. [Sam whacks a Totally Terri writer with a sock filled with butter]
(iTake on Dingo)

iCarly Fan: Okay, I dare Sam to get arrested.
Carly: Nope, uh-uh.
Sam: Been there, done that.
(iSaved Your Life)

Carly: [Freaked out] I kissed Freddie!!!
[Carly slams the door; leaving Sam shocked and alone]
Sam: [To door] You...you kissed Freddie?
Carly [Off screen]: Yes.
Sam: Well...lemme in there.
Carly: No, you're gonna hit me.
Sam: [Chuckles] Have I ever hit you?
(iSaved Your Life)

[Carly´s room just burned down; Carly is about to cry]
Sam: C'mere, kid. [hugs Carly] It´s okay, Carls. If you want, you can stay with me and my mom.
[Carly cries harder]
(iGot a Hot Room)

Sam:[taking Carly's head into her lap] Oh Carly! Stupid, innocent little Carly!
Carly: Why am I stupid?
(iGo One Direction)

Zack and Cody Martin (The Suite Life of Zack & Cody & The Suite Life on Deck)- Zack (Sam) is a troublemaker, and doesn't do very well in school, while his twin brother, Cody (Carly) is a more friendly person and more sensitive.

Maya and Riley (Girl Meets World)- Riley (Carly) always plays by the rules and has a good home life while Maya (Sam) does not.

(Liley) Miley and Lily (Hannah Montana)- Miley (Carly) is popular, and her best friend Lily (Sam) is always by her side to help her in her schemes. Also both pick on their third best friend Oliver (Freddie). Lily also ends up dating Oliver just like Sam dates Freddie (Loliver/Seddie). She also had that tomboyish appearance earlier in the series.

Sonny Monroe and Tawni Hart (Sonny with a Chance)- Sonny (Carly) is super-friendly, girly and always likes trying to help people, whether they ask for help or not. Tawni (Sam) is blonde, obnoxious at times, and very blunt with others. Tawni also has a mother who is somewhat "tough" on her, like Sam's mother, Pam Puckett.

Drake Parker and Josh Nichols (Drake and Josh)- Drake (Sam) is rebellious and likes to defy authority, but he shows that he really cares about Josh sometimes. Josh (Carly) is more thoughtful of others and sometimes takes the blame for things that Drake had done.

Kimmy Gibler and D.J Tanner (Full House) - Kimmy (Sam) can be rude, gets bad grades, and always hangs out at the Tanner's house. D.J (Carly) is nice and gets good grades. They both met each other when they were little.

Numbuh 2 and Numbuh 4 (Kids Next Door)- Numbuh 2 (Carly) is brunette and is more nice and is Numbuh 4's best friend. Numbuh 4 (Sam) is blonde, mean, and can beat up people.

Jade West and Cat Valentine (Victorious) - Cat (Carly) is girly and is always nice to others and tries not to be mean. Jade (Sam) gets easily mad and aggressive and tries to get back at the people who upset them. They both spend time together and have been friends for 2 years. Jade also tolerates Cat and is less prone to do or say mean things to her than she is with other people, like Sam with Carly.

Greg Heffley and Rowley Jefferson (Diary of a Wimpy Kid Series) - Greg (Sam) is sometimes a jerk and a slacker at school. Rowley (Carly) is sweet, funny and a good friend. They, like Carly and Sam have been friends for years. Greg gets annoyed by Rowley's silly childish behavior kind of similar to how Sam gets annoyed by Carly's girly personality.

Mordecai and Rigby (Regular Show) - Mordecai (Carly) is a responsible, mature person who cares about others and is shown to do well in school. Rigby (Sam) is shown to be incredibly immature, dumb, and sometimes selfish and rude towards his friends but does care about them. Also, Rigby’s father, Sherm (Pam), is shown to have a bad relationship with Rigby and seems to like Don (Melanie) better but that conflict is later resolved.

Alex Russo and Harper Finkle (Wizards of Waverly Place) - Alex (Sam) is mischievous and often gets in trouble, whereas her best friend Harper (Carly) is sweet and caring and tries to keep her out of trouble but sometimes helps her in her wrongdoings too (e.g.: fooling Freddie into thinking that it was clown day at school in iTwins or laughing at Jerry for not being able to carry Justin up a flight of stairs in Helping Hand)