Assassin is a paintball game Sam, Spencer, Carly, and Freddie engage in using "blowtubes" in the episode iSaved Your Life. At the beginning of the episode, it is established that Sam and Spencer are the only ones left in the game, as Carly admits on a webcast that Spencer "whacked" her on the first day while she was eating toast. On the other hand, Sam eliminated Freddie when she shot him while he was doing a camera test.

Both Sam and Spencer take the game very seriously; Sam, for one, going as far as to pack three back-up blowtubes on her with which she hopes to defeat Spencer. Sam also dresses in camouflage and hides behind a plant, waiting for Spencer to come home so she can ambush him. Similarly, Spencer hides in Sam's locker at Ridgeway, hoping to use the element of surprise on her when she goes to open her locker. When she eventually does, however, she slams the door in his face before he can take a shot.

In their competitiveness and desire to win, Sam and Spencer shoot innocent bystanders, mistaking them for opponents. Spencer accidentally marks Marissa Benson on the chest in Freddie's bedroom and Sam frags Rabbi Goldman at Ridgeway, thinking he's Spencer in disguise.

Eventually, Sam is able to defeat Spencer by hanging upside down from the Shay apartment's doorway and shooting him after a parcel delivery man stuns Spencer by hitting him across the face with a sucker. Jubilant in victory, Sam dances gloatingly around Spencer, triumphantly yelling, "Yeah, baby! Momma wins! I am the Ultimate Assassin!"

The game is mentioned again in Season 5 episode iApril Fools and the scene where Sam finally beats Spencer at it is re enacted, though it is somewhat altered.

It had an appearance in iMeet The First Lady when Gibby asked Carly "So Spencer is not your dad?".

Sam then shot Gibby in right Buttoch, with a paintball. 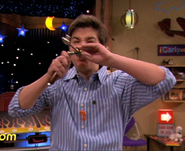 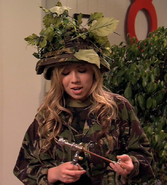 Add a photo to this gallery
Retrieved from "https://icarly.fandom.com/wiki/Assassin?oldid=939077"
Community content is available under CC-BY-SA unless otherwise noted.